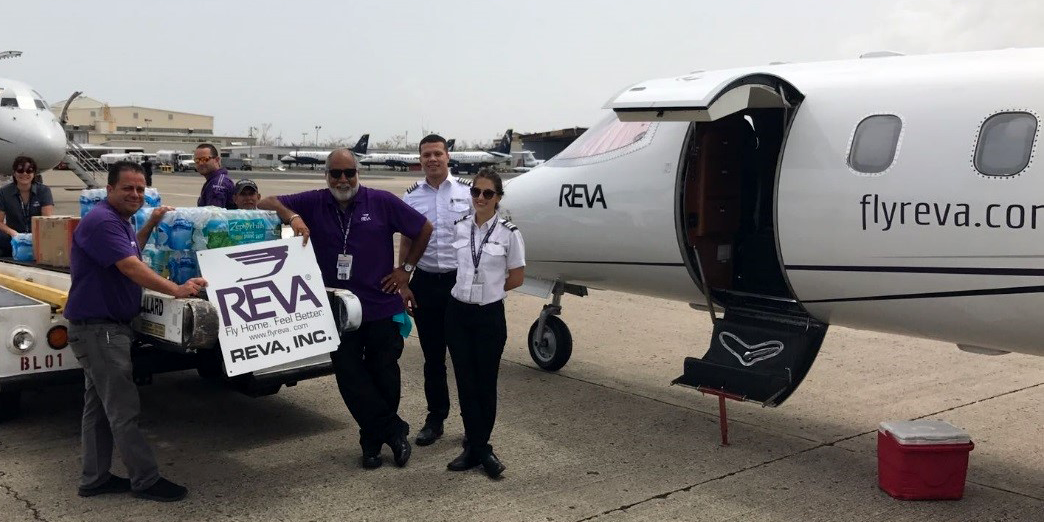 Though the REVA, Inc. base facilities in San Juan, Puerto Rico, like much of the island’s structures, are a complete loss, REVA teams have been active all week post Maria to bring much-needed supplies to colleagues, friends, and others on the island and to evacuate patients.

Three REVA team members from the REVA Fort Lauderdale base (at FXE) were flown into San Juan Luis Munoz Marin Int’l Airport in time to join two of the local San Juan team and meet the first plane to land at the airport post Maria, arriving early in the morning on Saturday, 9/25, a REVA Learjet 35 carrying supplies ranging broadly from canned foods, sports drinks, water, diapers, baby formula, to soap and other essentials.

The team set up a commercial airline belt loader, unloaded all the supplies and secured them in the only remaining storage room in the REVA hangar. These supplies were donated significantly by B’nai Torah Congregation in Boca Raton, FL as well as from REVA employees to be distributed to those in need.

The Saturday morning trip was the first of four relief missions planned through today, Friday, September 29, 2017, not long before the hangar is scheduled for major deconstruction.

With coordination from REVA’s Human Resources department, on Monday a call for additional donations went out to all REVA employees asking for flashlights, batteries, solar fans, and bug spray and basic medical supplies. These and additional B’nai Torah donations were loaded onto a Learjet 35 in the evenings and delivered to Puerto Rico very early the next morning. Not long after dawn, the REVA team-on-the-ground mentioned above, unloaded and secured supplies, and then loaded our dual-prop Cessna 402B with supplies for trips to St. Thomas and Tortola, Virgin Islands.

In the meantime, additional REVA aircraft and flight crews have been busy transporting patients off the island to maintain appropriate levels of health care at facilities back on the mainland.