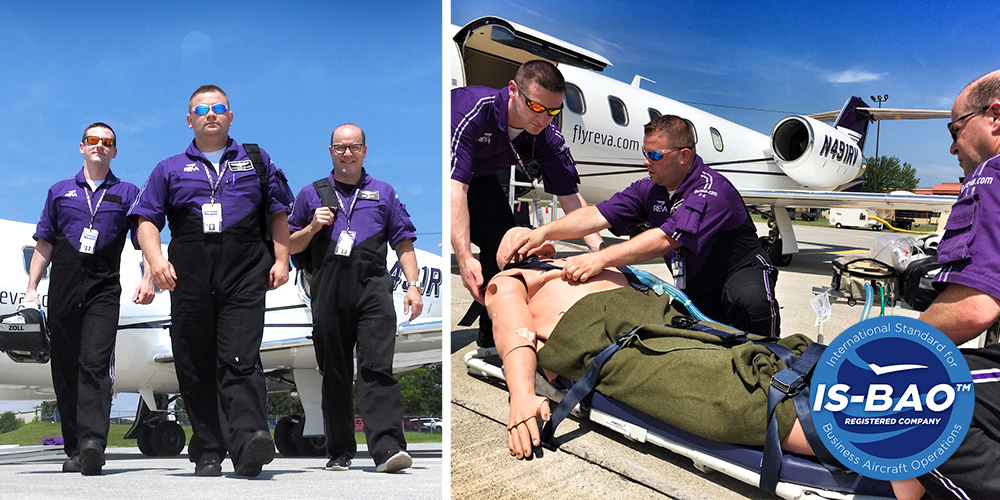 The prestigious two-year certification recognizes REVA’s effectiveness in meeting international standards of excellence companywide, including its commitment to safety and the culture of safety that has become part of its signature. The international component placed REVA on an even higher plateau of excellence.

The certification, developed by the International Business Aviation Council (IBAC) and its member associations, is a “recommended code of best practices designed to help flight departments worldwide achieve high levels of safety and professionalism,” according to the council’s website.

REVA, North America’s largest fixed-wing air ambulance service, went through a lengthy process to earn the endorsement, including an intense appraisal and an in-person audit that included a complete analysis of the company’s practices as well as a roundtable made up of representatives of every department.

“The IS-BAO accreditation brings with it a strong sense of satisfaction and pride,” said Stuart Hayman, REVA’s chief executive officer. “It means the company is in regulatory compliance with every phase of the aviation industry.
“This validates that we take operational excellence seriously when it comes to adopting best practices. REVA’s commitment to safety will never be compromised. Now and in the future, we will work alongside IS-BAO to ensure that we’re staying ahead of the trends in everything we do.”

In order to receive confirmation, REVA was required to submit a checklist of close to 400 items to IBAC.

“They put a lot of focus not only on our safety practices, but the culture of safety we have created,” said Emma Roberts, director of safety. “Once we felt we had identified the best practices, we sent in the completed checklist.”

An exhaustive review followed before an auditor visited REVA’s headquarters in Fort Lauderdale, Fla., in March for the final step, a three-day best-practices boot camp.

A roundtable review was the key to the final assessment. Management officials, pilots, mechanics and other representatives of the company’s departments were brought together by the auditor for an in-depth onsite survey.

The auditor “asked questions to make sure we weren’t just putting on a show. We were not. We believe in REVA’s approach to compliance, and we live it.”

For REVA’s patients and clients, the sought-after accreditation means the company is holding itself to the highest level of compliance on an international scale. It shows them that REVA is not shy about its practices, that it is willing to invite in a third party to have a look.

“It shows them we’re doing what we say we’re going to do,” Roberts said. “We are maintaining compliance while holding ourselves to the highest standards every day.”