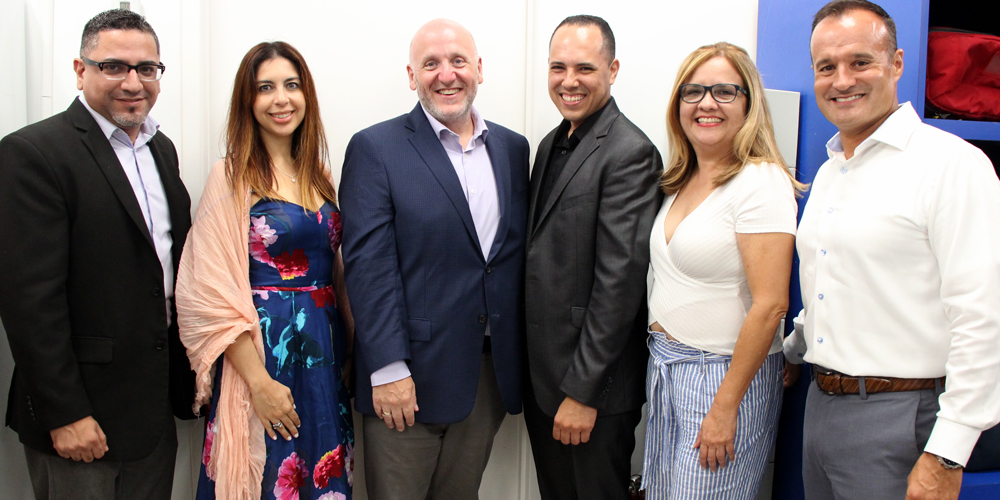 Fort Lauderdale, FL. – For REVA, life in a trailer is over. Its office at Luis Muñoz Marín International Airport in San Juan was re-opened in August, completing a rebuilding project after the facility was destroyed by Hurricanes Irma and Maria in the fall of 2017.

The re-opening served as an affirmation of the resolve and resiliency of the dedicated people who make up REVA, North America’s largest fixed-wing jet air ambulance service.

“After nearly a year of being significantly affected by the devastation caused by the hurricanes that struck Puerto Rico, we’re back home,” CEO Stuart Hayman told a group of about 50 people assembled for a re-opening ceremony. “It is a source of pride to know that we have a great team of employees that continued to provide flawless service despite very difficult conditions. We are proud to be back 100 percent at our SJU base, and we are proud of all of the people that make up our REVA San Juan Family.”

Completion of the project came as a relief to Carmen Mojica, REVA’s Caribbean account executive.

“I am quite grateful that we are up and running in a brand-new office space,” said Mojica, who considers the base her baby.

The hurricanes wiped out the office and hangar. Aircraft and medical equipment had to be repositioned out of Puerto Rico. Office staff worked from a temporary trailer provided by Jet Aviation Services, REVA’s neighbor and landlord, which rebuilt the facility in a project that took eight months to complete.

About 58 REVA San Juan employees were affected by the damage to the facility. While San Juan was down, REVA’s other bases of operation carried on. From the time the hurricanes hit until the ribbon was cut on a rebuilt base, REVA continued to reach out to San Juan’s neighboring Caribbean islands, also devastated by the storms. Service was never interrupted.

In fact, REVA was ready before, during and after the two major storms rocked the Caribbean from Puerto Rico to the U.S. Virgin Islands and other locales such as Dominica, the British Virgin Islands, St. Maarten and Tortola. REVA provided relief flights during both storms, delivering food and water to hardest-hit islands. During Irma in September 2017, REVA conducted six evacuations out of St. Croix and nine from St. Thomas under extraordinarily difficult conditions.

“That kind of team work and resilience speaks volumes about the people of this company and of this community,” said Philip C. Spizale, REVA’s chief sales officer. “Our REVA family is a confident and strong-willed group of individuals, driven to provide unmatched service that often saves lives. We take that responsibility very seriously.”