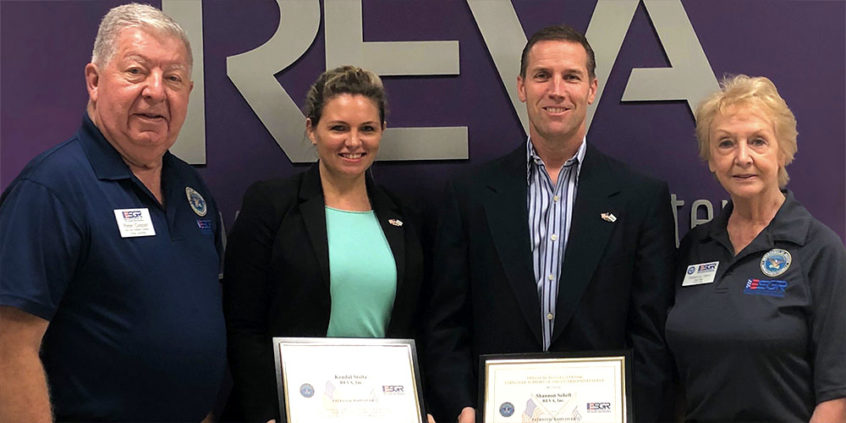 Two members of REVA’s management team have been honored by the Department of Defense with its Patriot Award. The award goes to individual supervisors in recognition for their support of employees who are serving in the National Guard or military reserves.

Shannon Schell, president and chief operating officer, and Kendal Stoltz, director of human resources, received the award from Department of Defense representatives after being nominated by employees. Schell was nominated by flight nurse Stephen Hallenbeck, an Air National Guard captain. Stoltz was nominated by REVA flight captain Alan Greene, whom she assisted in his growth from fixed-wing medevac pilot to Air Force pilot flying F-15s.

The award reflects support for military personnel through a wide range of efforts, including flexible schedules, time off prior to and after deployment, caring for families and granting leaves of absence.

The president of the largest fixed-wing air ambulance service in The Americas was honored to receive the award “because our organization fully supports former and current members of the military who work with us. It’s the mindset of REVA to support the military 100 percent.”

“If there’s anything REVA can do to help our military employees, I’m going to push the organization to do that. They are part of our REVA family.”

In nominating Schell, Hallenbeck wrote that the executive had been “very supportive in my active role in the military and the fight against terror that I have dedicated my career to. Shannon and REVA have remained supportive, engaged and responsive to any deployment, training or duty I have had to perform, if needed.”

Schell was surprised when two representatives of the Department of Defense arrived at REVA’s headquarters in Fort Lauderdale, in January, to make the presentation.

“I didn’t know it was coming,” he said. “They arrived unannounced. I was on a conference call, and my assistant told me the Department of Defense was here. I thought I’d better step away and see why they’re here.’”

Stoltz hired Greene, in late 2013, and watched him grow “from aviation intern, to first officer, to captain,” she said.  “Alan discussed, with me, his dream to fly fighter jets in the USAF and of his acceptance into the program. Coming from a family of military naval pilots, I was extremely proud of Alan. I am more than honored to be recognized for my outward support for our military and so humbled to be recognized for my efforts.”

Schell, whose father served in the Vietnam War, said “I support our nation’s military 100 percent”. He continued, “If there’s anything REVA can do to help our military employees, I’m going to push the organization to do that. They are part of our REVA family.”