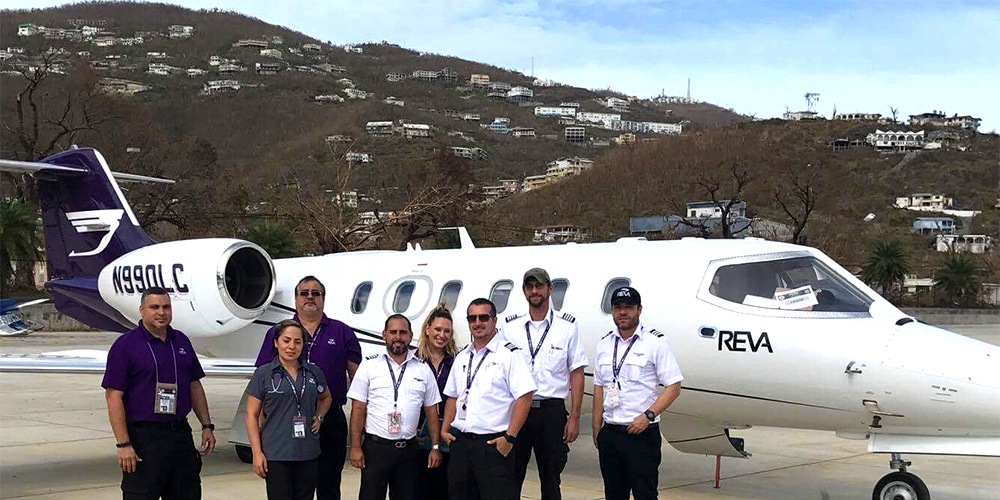 Fort Lauderdale, Fla. –  Through the work of its Emergency Response Plan committee, REVA had a blueprint in place to serve those in the Caribbean and Florida in the path of Hurricane Irma, a brute of a storm that left death and destruction in its wake.

“This mobilization effort in response to Irma has been like no other,” said Philip Spizale, the air ambulance service’s chief sales officer. “It certainly required creativity and support outside typical daily operations.”

REVA, the largest fixed-wing, aero-medical services provider in the Americas, went outside typical daily operations by playing a key role in relief efforts in the U.S. Virgin Islands. While helping families it didn’t know, REVA at the same time made sure the families it did know – its employees — were safe.

REVA was a key player in a six-company relief team assembled by FEMA in the U.S. Virgin Islands. The half-dozen air-ambulance firms converged on St. Croix and were dispatched by the FEMA air boss to select destinations. Two REVA jets — a Citation 501 and a Learjet 35A — were activated, and the 501 delivered the first evacuation team to St. Thomas.  REVA’s team was made up of Ivan Ocasio, pilot in command; Hector Sanchez, second in command; Orlando Mundo, respiratory therapist; and Randy Ferguson, registered nurse.

From Sept. 8 to Sept. 11, REVA crews conducted six evacuations out of St. Croix and nine from St. Thomas. It was tough going with airport fences down and power outages affecting runway lighting, but REVA operated efficiently. REVA usually transports one patient at a time. But in this case, two or three evacuees were aboard.

In addition to the FEMA missions, REVA conducted another nine evacuations for other clients, two for travel assistance companies, one for Medical Assistance Program out of St. Croix, and six out of Tortola for USVI National Health Insurance.  In all, REVA conducted 35 missions from the morning of Sept. 8 to Sept. 13.

The challenges were significant. One mission that illuminated REVA’s perseverance and dedication started at the Tortola airport in the British Virgin Islands. The pilot of the Citation 501, Ivan Ocasio, flew into Tortola to meet a helicopter from the British Embassy bringing in a patient in critical condition. The first helicopter broke down, and by the time the second helicopter could reach the REVA jet, and transfer the patient, it was dark and duty time was running short.

Another mission brought safety to one life and gave another a chance to arrive in relative comfort. It involved REVA’s new Hawker 800XP, which was dispatched out of the New York base in Schenectady to evacuate a U.S. military member trapped in her home in St. Thomas. She was 35 weeks pregnant.

The REVA team had to engage a large truck to push downed trees out of the streets to reach her house. She and the unborn were brought back to Bethesda, Md., for care in a military hospital.

In the meantime, REVA made sure it’s employees at bases in the hurricane’s anticipated path – San Juan and Fort Lauderdale – were safe. Many in Florida were evacuated to such far-flung destinations as Dallas, Atlanta, Charleston, S.C., and Pittsburgh.

As Irma subsided and headed over Georgia, flooding and power outages and blocked roads were still issues in north and central Florida. Despite the obstacles, REVA brought the evacuees back safely, and normal operations resumed Sept. 17 – a week after Irma hit the Florida peninsula.