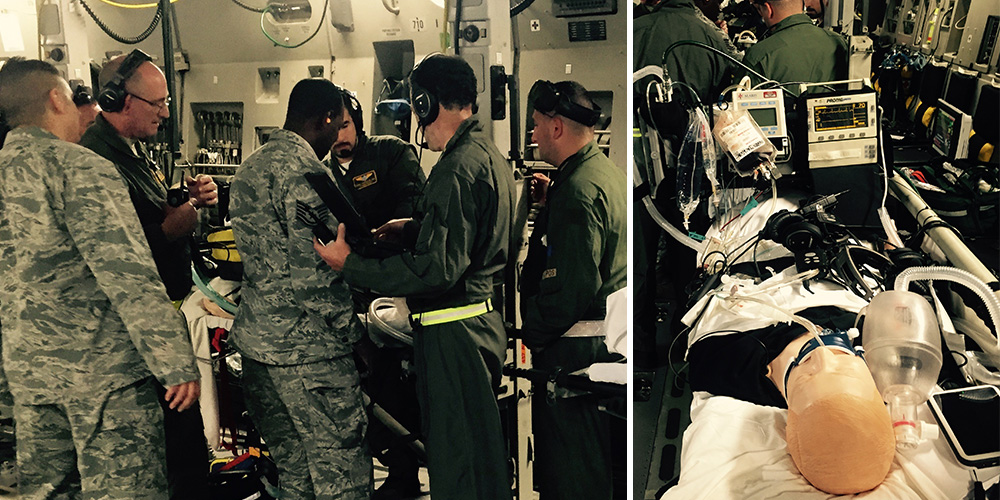 Fort Lauderdale, Fla. – REVA’s medical training mannequin was recently “enlisted” in the US Air Force as a patient on a MEDEVAC flight. The new, highly sophisticated training mannequin flew on a C-17 aircraft as part of Patriot Sands 2017, a complex US Air Force training mission designed to test military and civilian cooperation in a humanitarian crisis.

The MEDEVAC flight from Key West to Tampa simulated the evacuation of patients from a hospital threatened by the path of a large storm. During the flight, the REVA mannequin was used to put the critical-care staff through a number of complex emergency-medical drills, all designed to test their in-flight medical capabilities. The medical scenarios were scripted by Dr. David Farcy, REVA’s medical director, who also serves as Associate Medical Director for Critical Care on the FIU-FAST Team. “There is simply no better way to train air-medical staff than using this type of patient simulation in actual flight, and being able to use the REVA SimMan is very important to the team,” said Dr. Farcy.

Members of the 315th AeroMedical Evacuation Squadron, based in Charleston, and the FIU-FAST Team worked together to care for an aircraft full of critical patients, including the REVA SimMan.

“REVA’s commitment to clinical training and their support of our team really demonstrates their place in the forefront of aviation medicine in South Florida,” Steve Williams RN, Team Commander for the FIU-FAST.

“We are very grateful to REVA for allowing us to work with their “SimMan” mannequin, said Steve Williams RN, Team Commander for the FIU-FAST. “REVA’s commitment to clinical training and their support of our team really demonstrates their place in the forefront of aviation medicine in South Florida,” said Williams.