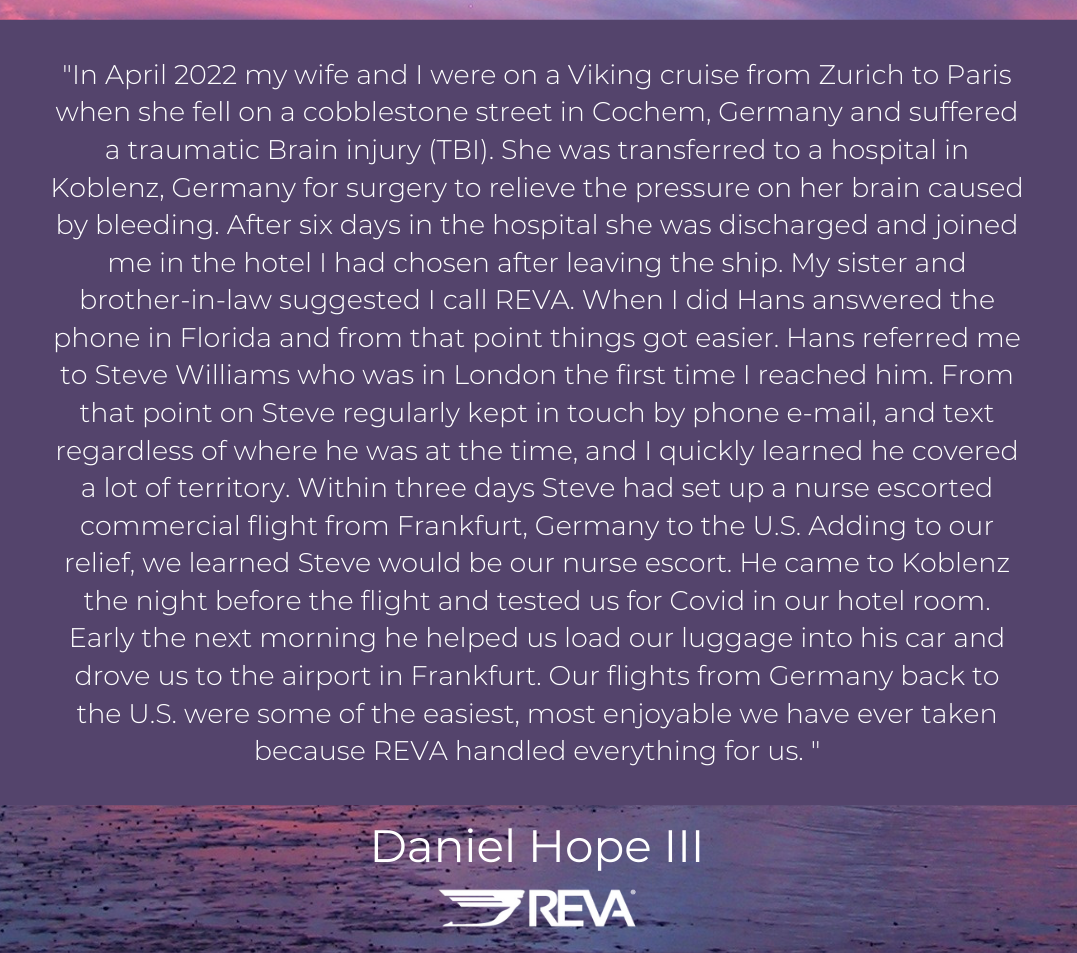 In April 2022 my wife and I were on a Viking cruise from Zurich to Paris when she fell on a cobblestone street in Cochem, Germany and suffered a traumatic Brain injury (TBI).  She was transferred to a hospital in Koblenz, Germany for surgery to relieve the pressure on her brain caused by bleeding.  After six days in the hospital she was discharged and joined me in the hotel I had chosen after leaving the ship.

We then had to figure out how to return to the United States and we called the travel insurance company Viking had selected to cover our trip.  Communication was difficult and we began to worry we might have to stay in Koblenz for months.  My sister and brother-in-law suggested I call REVA.  When I did Hans answered the phone in Florida and from that point things got easier.  Hans referred me to Steve Williams who was in London the first time I reached him.  From that point on Steve regularly kept in touch by phone e-mail, and text regardless of where he was at the time, and I quickly learned he covered a lot of territory.

I sent Steve all the medical reports we had, which we could not read because they were in German.  The REVA staff physicians and hyperbaric specialists reviewed the reports and began to plan a way for us to get back home.  Meanwhile, our travel insurance company said they could not make any arrangements for us unless my wife got another brain scan.  The German doctors and hospital told us another scan was not needed and exposing my wife to additional radiation was not something they would recommend.

At that point I decided to stick with REVA and Steve went to work making arrangements.  Within three days Steve had set up a nurse escorted commercial flight from Frankfurt, Germany to the U.S.  Adding to our relief, we learned Steve would be our nurse escort.  He came to Koblenz the night before the flight and tested us for Covid in our hotel room.  Early the next morning he helped us load our luggage into his car and drove us to the airport in Frankfurt.

Our flights from Germany back to the U.S. were some of the easiest, most enjoyable we have ever taken because REVA handled everything for us.