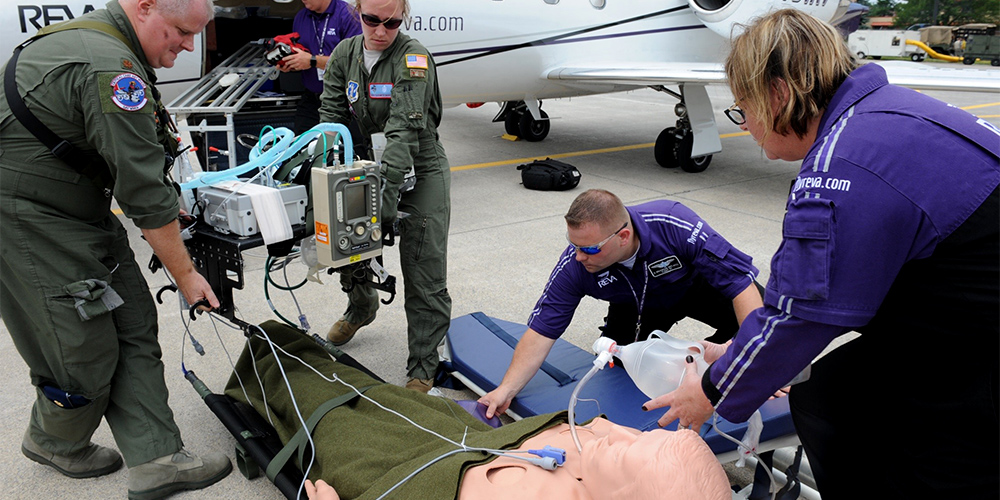 With the help of REVA’s Human Patient Simulator as a mock patient, the Air National Guard and REVA critical-care medical teams practiced unloading the “patient” from the Guard’s C-130 personnel carrier then transferring and loading “him” onto the Learjet 35A air-ambulance for a “wing-to-wing” transfer with REVA. 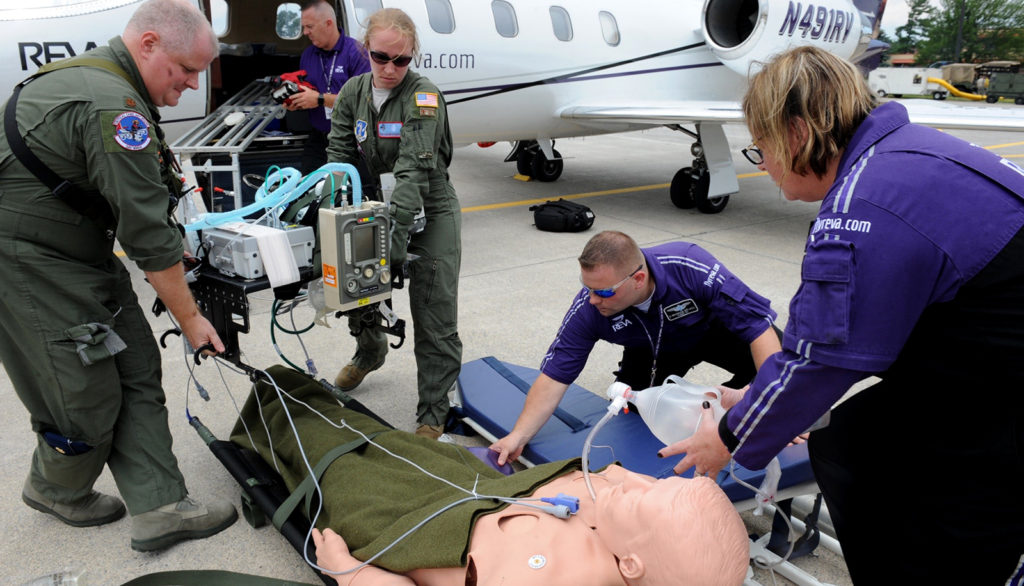 The cooperative training exercise resulted from a year-long design effort by Air National Guard Captain, Stephen Hallenbeck, the lead exercise planner of the 139th Aeromedical Evacuation Squadron of the 109th Airlift Wing in New York.  Hallenbeck, also a critical-care RN at REVA, said, “This exercise was a great success and the biggest to date. A highlight was the interaction between the Guard and REVA critical-care medical teams, the first time a commercial air-ambulance company was involved.” This success was further enabled by the assistance of Robbie MacCue, the REVA Field Training Officer at SCH. Mr. MacCue supported the planning effort and the REVA Medical Team involvement.

“It was a unique and invaluable opportunity to build real-time, real-world experiences and a more definitive plan for responding to actual natural disasters,” added Hallenbeck. Typically, the Aeromedical Evacuation Squadron would turn over the critical-care patients to a hospital. Hallenbeck said, “This exercise provided an invaluable opportunity to do the handoff on the ramp of the C-130 aircraft to the REVA team.”  REVA’s Safety Management System Manager, Calvin Hargaray, based in Fort Lauderdale at REVA headquarters, who was on hand for the four evacuation missions carried out over the two days stated, “We are better prepared and ready to support these efforts in real situations if ever REVA is called upon to support military hand-offs of this stature.”

These drills were in-depth scenarios of mass casualty situations, and they allowed us to put our Emergency Response Program (ERP) to the test.

Hargaray added, “These drills were in-depth scenarios of mass casualty situations, and they allowed us to put our Emergency Response Program (ERP) to the test. This was a great example of proactive safety management giving the team real-time hands-on experience. This experience allowed us to see what we may and may not do in conjunction with the military in response to a natural disaster. Overall, the whole experience promoted our growing safety culture and opened our eyes as to what to expect.”

Similar to the REVA Operations Center (ROC) digital board that shows where planes and patients are at any given time, the military version is a sophisticated system charting in real-time where around the world aircraft and patient transfers are.  An exercise version of this software was used to create charts utilized in this drill adding to its realism.

“This was the third such exercise to be executed over the past six years, and we plan to conduct similar drills every two years building on what we’ve learned, improving our response capabilities and partnerships each time,” Hallenbeck stated.